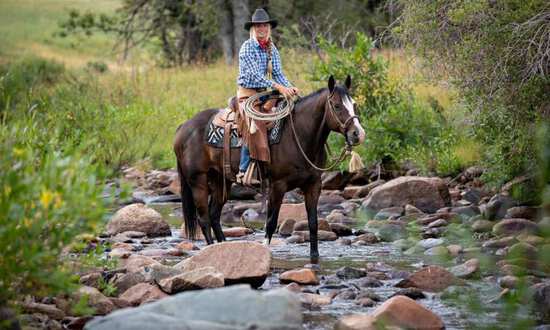 At horze.eu you can shop online comfortably and receive your product after only a few days delivery time.

Western riding - from a functional riding to a recreational sport

Western riding is a sub-discipline of equestrian sport that is still mainly prominent in the United States. However, western riding is also becoming increasingly popular here. Today, western riding is mainly associated with work on the large cattle ranches in the USA. The disciplines of trail, reining and cutting are based on the demands placed on the horse in daily ranch work. We offer a wide range of western products so that you and your western horse are perfectly equipped. As western riding differs in many respects from classical dressage or show jumping, the requirements for the equipment are different.

Everything you need for western riding

A thick rectangular western pad is placed under the western saddle with its characteristic saddle horn. The saddle is fastened like any other saddle using a girth. The western girth is relatively short and is buckled with a single buckle. In addition to the characteristic saddle, the single- or double-ear bridle is often used in western riding. These bridles do not have a noseband. Simple snaffle bits or shanks are used as bits. In contrast to a dressage bit, the shanks are used without a bridle. The reins are so-called split reins, as they are separate, unlike in English riding where the pair of reins is usually fastened with the help of a buckle. As an alternative, bitless bridles are often used, such as the sidepull. Knotted halters are often used in Western riding. When properly buckled, these are also very suitable for ground work.

Clothing for the Western rider

The western rider's clothing consists of jeans over which long chaps are worn if necessary. Western riding boots complete the look. Even though many western riders still wear traditional western hats, riding helmets (similar to those used in dressage) are becoming increasingly popular. Falls can happen even in western riding, especially as a beginner or when riding young horses. You should therefore always think about the right protective equipment. With our wide range of riding helmets, you are sure to find the right riding helmet even as a western rider.