What is pole work?

Pole work is the practice of negotiating poles lying on the ground in a controlled pace.

Pay attention to the movements of a horse running over several successive ground poles. The horse's movements are steady, even and balanced.

The arched back, the pointed ears, stronger footing, the activated hindquarters and the approach to the bit show that the inclusion of Cavaletti and ground poles has a very effective influence on the suppleness of the horse.

Exercising a horse with ground poles, Cavaletti and small obstacles can basically be done at any gait - at a walk to warm up, at a trot and also at a canter. However, because the length of the stride varies from gait to gait, the poles must be further apart for canter than for walk or trot.

The poles should be negotiated by the horse at a steady pace. The horse should not touch the poles with its hooves or disturb them.

Likewise, the horse should be allowed to look down when passing the poles. It is advisable to start with a few minutes of training. Once you feel that the horse is coping well with negotiating the Cavaletti, the duration and intensity of the session can be increased.

What do I need for pole work?

If the horse is being exercised from the saddle by the rider:

If the horse is being exercised from the ground:

If the horse has no previous experience with pole work, it should first be familiarised with the ground poles. Before asking the horse to step over the poles, the poles should be shown to the horse. It is advisable to lead the horse around the poles a few times beforehand so that it does not get scared. If the horse gets to grips with the poles, maybe taps against them with its hooves or feels the poles with its mouth, the first step has been made.

As soon as the horse is familiar with the ground poles, it can be carefully led over a pole and the number of poles to be overcome can be slowly increased.

What is the correct spacing of the ground poles?

In order for the horse to be able to complete the exercise series in time, the following measurements are a guideline for warmbloods:

Exercising the horse with the help of ground poles is a great way to make the training varied and, above all, effective.

Positive effect on the hindquarters

As the ground poles are higher than the ground of the training arena, the horse has to lift its legs to negotiate them. This activates the musculature and promotes the mobility of its locomotor system. The back and its muscles are also activated and trained, as they arch up when the horse runs over the poles. For horses that are already experienced, the poles can be raised using Cavalettis, which requires the horses to lift their legs even more.

Suitable equipment for you
RRP -25%

What pole work exercises for horses are there?

If the horse is familiar with the ground poles and walks over them without any problems, the poles can be placed on the ground at the correct distance, one after the other (ideally four poles), and the horse can then be made to walk over them. To make the task a little more difficult for an experienced horse and to encourage it to think along, you can also arrange the poles crosswise (one after the other, of course).

In this exercise the poles are placed crosswise. However, they do not meet in the middle and instead form an inner circle, which should be at least 6 m wide. The horse can now be lunged and ridden over the poles in all gaits in the inside position. After a successfully completed round, the circle can be enlarged again slightly so that the horse goes around the poles a few times before the circle is reduced again. 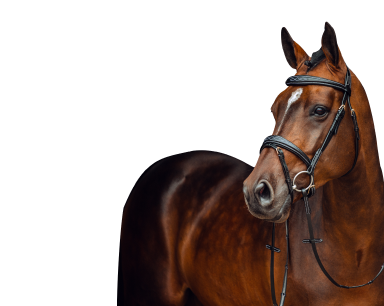